The place God calls you is the place where your deep gladness and the world's deep hunger meet.

Unfortunately, in the original article there are three crucial stats in here upon which we were misquoted. (They've been edited below for my peace of mind.)

I'm dealing with it.

The collapse of an adoption agency has left a Crofton family in limbo but still hopeful that all will go well with their application to adopt a little girl from Ethiopia.

Ashleigh, 29, and Ben Keizer, 32, and their two small sons, two-year-old Tait and four-year-old Noah, had been preparing for good news about a baby sister when the Imagine adoption agency announced its bankruptcy in mid-July.

Like many others across Canada, the couple had an application in the works.

They had hoped to adopt a little girl and were looking at hearing in September or October that they had been approved.

After deciding to complete their family with an adopted child, the Keizers chose Ethiopia and began working with Imagine in April 2008.

It was not an easy decision.

Ben said, "It's what we felt we needed to do to complete our family. So we began the quest. We knew at the time it would be a journey, not necessarily knowing it would take this turn, of course, but we were ready for whatever came."

Asked how they came to choose Ethiopia from all the countries of the world, Ashleigh said, "Different countries have different regulations, guidelines on who can adopt. For instance, for China you need to be 30 or your income needs to be a certain amount. A lot of countries allow for adoption by relatives only. In India, you have to be at least partially of Indian descent. But, that said, there were still several choices for us."

Only a few African countries allow adoption and Ethiopia is one of them.

"The statistics really grabbed us," she said. "For example, one in six children die before their fifth birthday. There's a ratio of one doctor for 24,000 children. We found that kind of thing hard to digest."

Some people here have asked why they didn't consider adopting a child from Canada, but there were some important reasons for their decision, Ben said.

"I think for us there were a lot of things that make that kind of adoption harder. One of them being the fact that up to six months after the adoption happens, the family can take the child back. We weren't really ready for those six months of uncertainty. That was scary for us. We have kids, too. Already the kids don't understand what has happened. We have requested a girl as our preference and the boys are already asking where their baby sister is because we started prepping them in advance. Of course, we had to."

Important details like not seeing mommy's tummy growing before the baby arrived and the race of the hoped-for daughter were aspects that had to be explained carefully to a pair of pre-schoolers, the couple said.

However, supported by the prayers and good wishes of friends, the Keizers have significant hope following a meeting in Ontario to deal with the bankruptcy.

"The important thing for us is there's still a lot being done in the background from families and people who are quite concerned about the situation and who are trying to bring the company back out of bankruptcy. We were actually on a conference call with some of the families just talking about this. They are really positive, focusing on how we can make this better, how can we work together to bring these children home," Ashleigh said.

"It may be to start or complete families but it also gives these children opportunities they might not otherwise have. It's been neat to see all the families and the other creditors and stakeholders come together to see them say they will do what they can," she said.

The Imagine bankruptcy came out of the blue to the Crofton family and the agency they had been dealing with in Victoria.

Up until then they had done their homework and been expecting to hear of a matching child this fall. Then the little girl would have gone into the Imagine transition house in Ethiopia for the final six months or so of processing paperwork.

That transition house, which can house up to 40 children, is unusual and had helped Imagine streamline its adoptions; some of the money from the $14,000 in adoption fees was used to support it while the rest went towards the maintenance of orphanages and their connected agencies in Africa.

On top of those initial fees, of course, is the cost of getting the child home to Canada but the Keizers were prepared for all of that.

"We're hopeful that this is still a viable option."

The couple don't expect to hear anything from Africa. Any news will come from within Canada but Ashleigh said she's buoyed by the knowledge that there's a positive relationship between Ethiopia and the Ontario officials.

The family has a blog about their adoption journey. It's been running over the year and a half and Ashleigh hopes to turn it into a "life book for our daughter."

The content of the site has evolved but it's important to show her, when she is older and perhaps feeling culturally homesick that the decision to bring her to Crofton and make her part of their family was not taken lightly, Ashleigh said.

Ben said the family is optimistically looking towards the new year and hoping that any news they receive is positive.

On the website of BDO Dunwoody, who are handling the bankruptcy of Imagine, the following brief notice is all the news at the moment: "Effective July 14, 2009 Kids Link International Adoption Agency is bankrupt. Update From Ethiopia: BDO has had discussions on July 20 and 21 with our representative in Ethiopia. The children and conditions are all good with proper supplies for all as needed. BDO continues to assess ongoing financial and other needs to ensure proper and complete care."

Ben said, "The bankruptcy trustee has been phenomenal. Part of the job for us is trying to decipher the information that's around on the Internet, to determine what's really happening. It was a lot of waiting up until they had the first creditors meeting in Ontario, so it's just trying to keep emotions under control and wait. Out of that meeting there was a unanimous decision to try to bring Imagine out of bankruptcy. That's where it is right now. There's a group that's trying to come up with a plan to bring them out. Of course there has to be a settlement of creditors in that proposal."

However, in the interim, the couple are ensuring they spend all the time they can with Noah and Tait.

"We have to focus on our kids. It's not fair to not enjoy our time with them now. It passes so quickly," Ashleigh said.

Family and friends from the Warmland Community Church have been prayerfully involved, offering a lot of support and encouragement during a difficult time of waiting, they say.

Email ThisBlogThis!Share to TwitterShare to FacebookShare to Pinterest
Labels: Book

Ashleigh
We are a young family, living a sunny, happy, extremely blessed life. Three kids, a dog, and all the craziness life brings. We rejoice each day as we reflect upon the journey we have just gone through to bring our sweet Makeda home from Ethiopia. Three and a half years of waiting, praying, and dreaming of her, has come to an end. We are blessed. Please come back from time to time as we share our story of four becoming five...and figuring out our life together. We are The Keizer Five. Forever. We love hearing from our family and friends so feel free to leave a comment or send us an email. 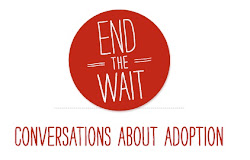